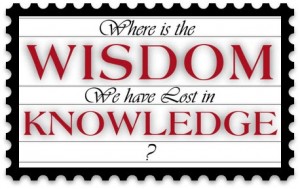 We live in a time with unprecedented technology; the knowledge and information at the fingertips of modern civilization far exceeds anything our forefathers could have imagined. And with each passing moment, today’s technology seems like an antique in light of the innovations being uncovered daily catapulting us into an intelligence age never before seen!

Why is it then, that we are witnessing the decay of a country, along with a world, at a rate matching that of our growing intelligence? Why is it that although the Internet helps us reach around the globe instantaneously, we find ourselves too busy to reach across our fence and greet our neighbors with a smile? Why is it that the “smarter” we get as a culture, the more we see senseless acts of violence perpetrated against human life? Is it because of firearms, explosives, knives, blunt objects, etc? Last I’ve seen these items, left out of the human hand, can do no harm. Isaac Asimov, an American author and professor of biochemistry at Boston University was quoted as saying “The saddest aspect of life right now is that science gathers knowledge faster than society gathers wisdom.” He hit the nail on the head! When wisdom is reduced beyond the level of knowledge, ignorance replaces it!

Historians and Scholars have concurred for years that powerful civilizations of our past, such as Greece and Rome, were destroyed by a combination of as few as three or four of these symptoms of social, cultural, and moral decline; all self-created situations: 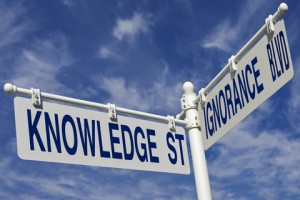 An excerpt from an article, A Tale of Three Empires by Jim Bramlett, contains a great example of both the Greek and Roman Empires and their fall. As you read, I beg you to utilize this time to not only gain knowledge of this unarguable history, but try to embrace the wisdom which can drawn from it!

“”In philosophy, in warfare, in the early sciences, in poetry, in grace of manners, in rhetoric, the Greeks excelled all civilizations that preceded it. No other race has ever produced, within a brief period, so many brilliant individuals as did the Greek people at the height of their glory.”

Aristotle, Socrates, and Plato, recognized the world over as sources of wisdom, helped ancient Greece become one of the highest civilizations ever to exist. The early Greeks held to a strict code of purity. Homosexuality was a capital offense. Greek arts and literature, the centerpiece of their society, extolled the virtuous man. Loyalty to the state and neighbors was among the highest callings. Self-sacrifice and examination were the norm. Two ancient maxims were inscribed on the walls of the temple at Delphi “Know Thyself” and “Nothing in Excess.” 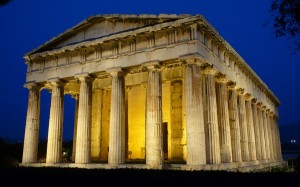 The Greeks were noted philosophers and thinkers, yet their failure to come to an understanding of God subverted their success. A decline in virtue and morality swept the culture like wildfire. Absolute truth no longer existed. Greek society began to falter and drift. Despite their knowledge of democracy, a respect for the republican institutions of government, and their complex understanding of the principles of constitutional government, no stable political institutions were ever created in Greek society.

Homosexuality was glorified. The stage and arts, once the hallmark of the noble Greek character, became lewd and violent. Lacking focus and a consensus of values, the once-great culture became gridlocked in a succession of civil wars. Years later, Greece succumbed to the Roman army. Ultimately, however, Greece was not destroyed by Rome, but by its own moral collapse.

Rome did no better. The Romans passionately sought great feats of engineering. They were tireless political administrators and organizers of military success. According to Russell Kirk, they were men of law and strong social institutions who gave the world Pax Romana, the Roman Peace. Observers said, “All roads lead to Rome.”

The strength of Rome lay in her political structures and her strong families. Both were governed by the concept of the “High Old Roman Virtue.” Romans believed strongly in being earnest, tenacious, well-disciplined, frugal, and self-sacrificing. Duty, honesty, and honor all complimented the virtue Cicero described as the foundation of all others — piety. 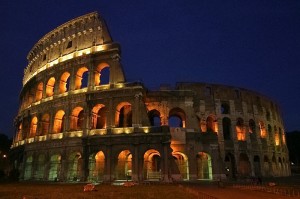 “A man was pious,” writes Russell Kirk, “who gave the gods their due through worship and sacrifice, who honored his father and mother, and indeed all his ancestors, who stood by his friends, who was ready to die if need be for his country. A pious man submitted himself to things sacred, and believed unflinchingly that it was better to perish than to fail in his sacred duties…A society that is held together by such a cementing belief would offer strong resistance to forces of disintegration.”

The nation slowly declined as wealth, power, and passion took first place in the Roman heart. Once again, society became preoccupied with sensuality.

Roman thinker Sallust observed, “Young men were so depraved by luxury and avarice that no father had a son who could either preserve his own patrimony or keep his hands off other men’s.”

As the bottom fell out of the social order, Roman citizens lost interest in piety and dignity and focused on day-to-day survival and instant gratification. Consequently, the Romans lost their respect for human life. Citizens worshiped the gladiators who fought in these arenas. Originally punishable by death, abortion became common, even encouraged. Violence was epidemic. Gang violence exploded, washing away the last vestiges of order. Soon after, ancient Rome collapsed.””

It is obvious what brought the civilizations to their knees, yet we continue to follow in their foot steps. It is possible that we are the fist civilization in history to possess all 10 of these social, cultural, and moral diseases at the same time! Have we reached a state of arrogance to believe that we possess the knowledge and know-how to to avoid this destruction while being fully immersed in all ten? 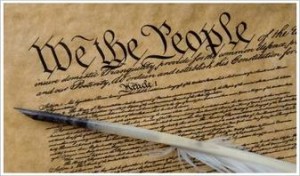 Ecclesiastes 1:9 states “What has been will be again, what has been done will be done again; there is nothing new under the sun.”

So this brings us to the question of all questions; IS IT TOO LATE TO SAVE THIS GREAT COUNTRY OF OURS? IS IT INEVITABLE THAT WE TOO SHALL FALL AS A NATION? I think not! That is, if there are enough of us out there that still believe in this country; in the principles by which it was established: One Nation Under God! Our future at this time is NOT decided for us; not yet! But time is running out! If we do not embrace the gift of free will that God so generously, and I imagine reluctantly, has given us and utilize it along with the wisdom that can be obtained by the history we have at our fingertips to begin turning the virtue and morality of our nation and world around, then yes we will fall victim to the same fate as many other great civilizations. But I believe we need not let our gift of knowledge be squandered in ignorance. We as a majority must turn back to God seeking wisdom! Proverbs 4:6-7 “Do not forsake wisdom, and she will protect you; love her, and she will watch over you. Wisdom is supreme; therefore get wisdom. Though it cost all you have, get understanding.”